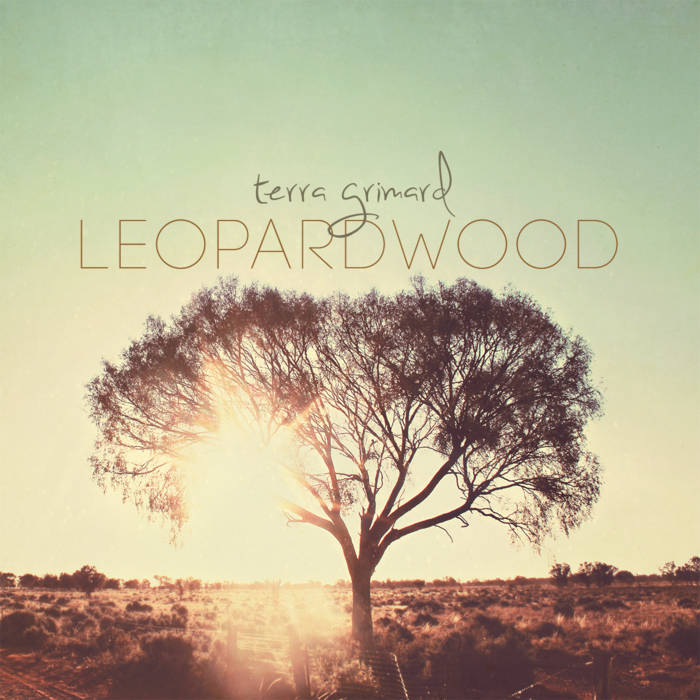 Terra Grimard's second full-length release 'Leopardwood' was written on acoustic guitar in the Australian outback. Each album download comes with a 48-page digital booklet of liner notes - a story book to the album. For more information visit www.terragrimard.com

Vocals, acoustic guitar and acoustic piano recorded by Terra Grimard at Kalyanka Station - Wilcannia, NSW Australia
Organ and electric piano recorded by Terra Grimard in Sydney, NSW Australia
All other instruments recorded by Mike Ardagh in Toronto, ON and Vancouver, BC Canada
Drums recorded with Andrew Mullin at Junction Studio in Baltimore ON
Additional recording by Andrew Mullin at Triceratone Audio and Canterbury Recording Studios in Toronto ON

Mixed by Mike Ardagh in Montreal, QC www.mikeardagh.com
Mastered by Reuben Ghose at Mojito Mastering in Toronto, ON www.mojitomastering.com
Photography and artwork by www.appletreecafe.ca

Track Name: Photographs
This is what we do
Another day rolling
Out into the vast, the miles they are piling
The scenery past is a backdrop for this love
The windows are down
The sun it is shining
But not like we do, not like we do
We're telling stories and creating new ones too.

Every step of the way we are living, nothing is to lose
All of the photographs that we take are fragments of the truth

Yeah, we're way out, standing on mountains
For a few extra miles sitting next to you
Laugh 'til we die, the music is cranked and we're high

Every step of the way we are living, nothing is to lose
All of the photographs that we take are fragments of the truth

And after it's over, we'll have to remember
These photographs won't be the same as being here with you
Track Name: Gold Field
Say hello to the ocean for me
I am missing home, the salt air on my skin

When you trust your heart you can go anywhere
Track Name: Pocket Love Song
Sunrise, fill my day up with light
Enter my heart through a doorway I open just for you
Soak me through
Explore, so many steps unknown
But we are traveling souls and we capture the enchantment
Through the eyes the skin the heart

Would you write me a love song?
Put it in my pocket for me
One day when I'm lost, unfold it and I will be
Reminded to love, I carry love, inspired to love
I carry love from you

Just breathe, imagine the highest tree
It is a wonder, a joy just to be alive and reaching
skyward, skyward

Boundaries are meant to be pushed
Ceilings, they are for dwelling for lifting
Higher with each dreamer dreaming
Track Name: Black Steps
My love
I guess we recognized what
We tripped onto
Not fools gold
This is the real stuff
Blow the cobwebs off
Give it light and water
Watch it grow

The black steps
Who knows where the foot goes?
Trust the ground to meet the feet
The time to pass
The wind to blow
They won't believe us
They won't see magic here
But we can't forget
We cannot let them take the dream from us

An open heart and withered hands
On a road that has no map
Trust the signs, trust the end
The black steps will take you there
Track Name: Outback
You go out and out and out
You can't imagine going out anymore
You think what's here? what's here?
But there's more, there's more
Take a close look, take it in
See yourself in bigger spaces

Big heart, red soil
Good life is simple
Brave the heat, praise the rain
Know the land and watch the days go by

It grows, it grows on you
In unexpected ways
The skyline is your compass
The birds, the sounds, the birds
Become the soundtrack of your day
Track Name: The Chicken
You're the apple of my eye
I knew it from the get go
Constellations have aligned
For you and I to be right here now
Sometimes life knocks at the door
You jump out the window
This time I won't be far
I won't be going far

Kicking up the dust with boots
Dancing under full moons
Feeling so alive with you
Track Name: Leopardwood
Leopardwood I have come back to you
You have something to show me
Something to reveal
I know is that it better be good
I left my lover all strung out
Left him by the tracks
My whole heart is heavy

He sat with me until the end
They said, this train's about to leave
Ticket holders only please
My heart broke loose as the tears leapt out
There was no strength inside of me
Was no foot-holding
Broken banks along the river

I want to calm the sea
But it's built up swell and needs to roll itself out
Mice are climbing in the walls
I pray that they'll move along
But no, they're nesting. A home they're building

Endlessly
Track Name: Top Shelf
Scaffold to the sky of your heart
A rainbow I climb to the top where you are

You, you are the ceiling of
What dreamers imagine love to be like
You are the top shelf up
With the magic parts of a good life

Point the way up to where you are
I will do my best to get there
What I wouldn't give just to be close
Have you wrap your world around me
Track Name: Red Shoelaces
Sister let's just brighten up
The sky we are running across
Re-tie your red shoelaces
And lets do this

Bandcamp Daily  your guide to the world of Bandcamp

Featuring Oakland sounds from the Smart Bomb collective and Samplelov.